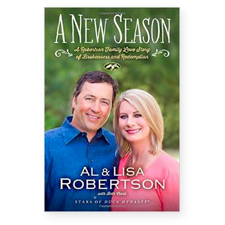 Infidelity, deceit, distrust and shame. It happens in the best of families–even the family-values, Bible-following, Christian-based Robertson family. Specifically in the marriage of Al and Lisa Robertson.

As the oldest Robertson kid, Al was witness to his father's drunken tirades and his mother's sorrow. Al brought a boatload of baggage into his marriage. Lisa, molested as a young child by a relative and promiscuous for several years, came into their relationship with baggage of her own.

In spite of it all, they settled in as a young married couple, had two beautiful girls and Al took a position as pastor in the church where his family had been members for years. And so when it was discovered that Lisa was having an affair, the heartache and tension became a very public thing. And it almost destroyed their marriage and fragmented their families. Almost.

But this is not just a book about a marriage gone wrong. It is about rescued love, renewed commitment and the strength to salvage a relationship that seemed certainly lost.

In A New Season, Al and Lisa share not only their personal stories, but what they learned about rebuilding lost love, destroyed trust and a real family. Their hope can become anyone's hope. Their restoration can take life in any marriage. Their pain-filled honesty and hard-won wisdom will be your gain.