by David and Jason Benham 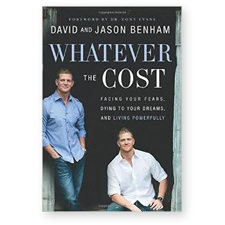 Whatever The Cost
by David and Jason Benham

In the spring of 2014, just as their network television show is about to debut, David and Jason Benham find themselves thrust into a media firestorm. Citing concerns over their conservative views on abortion and traditional marriage, the network abruptly cancels the Benham's new show, Flip It Forward. Freedom of speech and religious liberty are nowhere in sight. Yet the brothers are unfazed.

Whatever The Cost chronicles the journey of two highly driven, faith-filled brothers bent on chasing their dreams and expanding God's kingdom. When these two objectives are at odds, however, the Benham brothers face a seemingly difficult choice: Sacrifice everything they believe for the sake of the dream. Or give up the dream in favor of their core beliefs. Ask them, and they will tell you the decision is not hard at all. As Jason puts it, “When you hold your dreams with an open hand, God doesn't have to pry your fingers loose when He takes them away.”

With confidence, courage, and an infectious can-do attitude, David and Jason Benham demonstrate how to face your fears, die to your dreams, and live powerfully for a greater cause.