LIFE Updates: "Praise be to the God and Father of our Lord Jesus Christ, who has blessed us in the heavenly realms with every spi… https://t.co/nM6lAnD82I 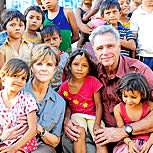 Reminding the children of Israel of how they were led when God brought them out of captivity in Egypt, Moses said, "(God) goes before you on {your} way, to seek out a place for you to encamp, in fire by night and cloud by day, to show you the way in which you should go" (Deuteronomy 1:33).

Throughout the course of his ministry, James Robison has sought God’s will and direction. As a result, the course of his ministry resembles the path drawn by the Israelites as they followed the Lord in the wilderness and the Promised Land eons ago: Instead of a straight-line progression from point to point in a single direction, James’ journey has been a winding path with unexpected, sometimes unexplainable twists and turns

To some, this kaleidoscopic effect is confusing. People have sometimes asked: "Why don't you select one thing to do and stick with it?" Or even: "Do you really know what God is leading you to do?"

Through the years, James' response to such criticism has evolved as his understanding of the Christian life has grown. He has come to see that, in charting the life history of a believer, God does not lead randomly, as the winding course of God's calling on James' life is evident not only in the broader pattern of things, but also in LIFE's year-by-year, month-by-month and day-by-day operations.

At one point, the ministry's major emphasis may be on Africa. A short time later, it may be on Romania, China or a new crisis area. Not only does the locale of ministry emphasis often change, but also the form and duration. Sometimes the humanitarian assistance provided along with the Gospel may be in the form of emergency relief items. Sometimes it may be in the form of seed, tools, education or training. Some projects may be short-term; others long-term.

God directs the emphasis according to the needs He brings to LIFE's attention and the provision He makes, through the prayers and support of caring people , for LIFE to respond.

God has led LIFE Outreach to see its role as that of "lampstand." Rather than going out to be "the light of the world" with its own organization, personnel and resources, LIFE finds and supports reputable, effective missionaries to partner with in ministry efforts. These mission partners, already established and proven, are then supported by LIFE so that they can serve as "the light," save more lives and draw more souls to Christ.

While the goal is to always follow God's guidance, LIFE's mission is to help shine the light of God's truth to those who are in darkness, to help them become "lights" in their own right, and to lift them from the valley to the hilltop where they can be seen by the whole world

Currently, LIFE ministers in 35 nations across five continents. Throughout Africa, LIFE helps feed more than 350,000 children in crisis areas and assists with school feeding programs to encourage school attendance and education. According to reports from the field, Mission Feeding has helped save the lives of more than 18 million starving children.

Medical clinics, orphanages, fruit and vegetable farms and food processing plants are also part of LIFE’s outreach in Africa. As a result of LIFE-sponsored crusades and the ministry that occurs at the feeding centers, there have been more than 12 million decisions for Christ since 1990. The ministry has also helped provide more than 6200 water wells for people in desperate need of clean water through the Water for LIFE outreach, which began in 2000.

As LIFE continues to expand its ministry outreach, we will work to establish and strengthen effective outreaches in every population center throughout the world.