LIFE Updates: A reminder that if you're in a rough season, God has a purpose for you. https://t.co/GTb8hp8xQr https://t.co/G4XLx9BaMG 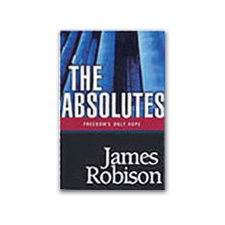 The Absolutes (paperback)
by James Robison

Freedom, security, peace, opportunity are just a few of the characteristics of a society rooted in the absolutes. In recent years, absolute truth has come under fire. Society's thinking has shifted toward relativism – and the impact on our culture has been devastating.

In The Absolutes: Freedom's only hope James Robison provides a thought-provoking evaluation of the nation's and world's moral and spiritual fiber.

The Absolutes was borne out of James Robison's passion to encourage a return to the rock-solid principles necessary for securing enduring freedom. This book shines as a beacon of light to a nation that is searching in the dark for its moral identity.