LIFE Updates: All of Jesus' teachings point back to the importance of loving God with everything we have to give. When we do that… https://t.co/oUDOzgGUqa 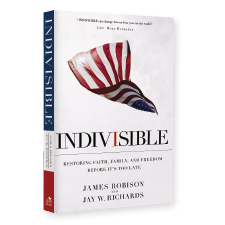 In Indivisible: Restoring Faith, Family and Freedom Before It's Too Late, James Robison partners with Jay W. Richards, a writer who has appeared in both the New York Times and The Washington Post, to tackle tough, controversial political issues facing conservative Christians today.

Using Scripture as a foundation, this book provides simple arguments that Christians can use to support their beliefs in public settings.

One of the book's supporters shares that Indivisible reminds every Christian that “good stewardship of freedom's blessings means recognizing that the moral and economic foundations of American liberty are indeed, indivisible.”