LIFE Updates: And when you pray, do not keep on babbling like pagans, for they think they will be heard because of their many wor… https://t.co/AfoXeDWSjB 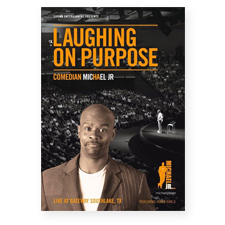 Laughing On Purpose
by Michael Jr.

With multiple appearances on late night television, such as The Tonight Show with Jay Leno, Jimmy Kimmel live and Comedy Central, comedian Michael Jr. Has make a name for himself. He has compiled his family focused, laid back stand up comedic style into this, his first solo comedy special on DVD. His comedy has been proved to be edgy enough for Las Vegas and clean enough to be enjoyed in church. Laughing On Purpose will push you to laugh until your face hurts while inspiring you at the same time.