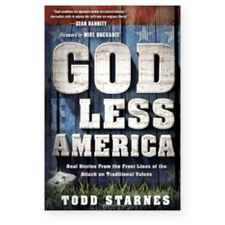 We are facing uncertain times. America's values are under assault. Religious liberty has been undermined. We live in a day when right is now wrong and wrong is now right. The vicious left-wing attacks against the recent traditional marriage stance of Chick-Fil-A and Duck Dynasty should serve as a wake-up call to people of faith. It's not about ducks or chicken sandwiches. It's about religious liberty. It's about free speech. It's about the future of our nation.

As a national reporter covering the culture war, Todd Starnes is on the front lives of these attacks against traditional values. In God Less America he uses both recent news stories and compelling interviews with today's top conservative leaders to bring to light what is happening across our country. In his award-winning, satire-meets-serious writing style he strikes an important blow in today's culture wars.