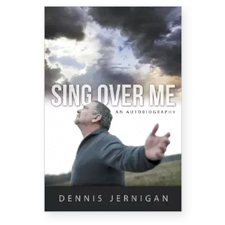 Sing Over Me
by Dennis Jernigan

Since 1988 Dennis Jernigan has ben publicly sharing the story of how he walked out of a perceived homosexual identity. Why? Because he remembers being a boy wondering if freedom was possible. The church didn't have answers. The world didn't have answers. The gay community just tried to make him give up and accept it as his innate identity. Yet, something deep inside kept knocking at the door of his heart saying, “There must be more. This cannot be your ultimate destiny and identity.” When God met him with the Truth of the transforming power of Jesus Christ, he began what he called his incredible journey, and he began to realize he'd been lied to by the world and the philosophies of man.

After seven years of freedom under his belt, the Lord asked him to begin publicly sharing his story because there were others out there who felt the same–that there must be more. This book is for those who want to experience God in an intimate, life-changing way, regardless of whether or not they've struggled with unwanted same-sex attraction. This is his story, yet really it's the story of redemption found in knowing Jesus Christ intimately.